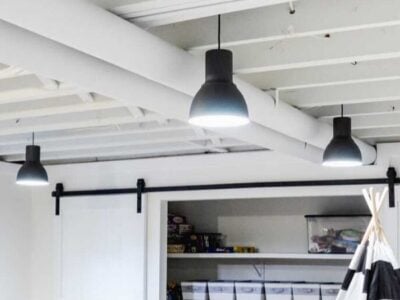 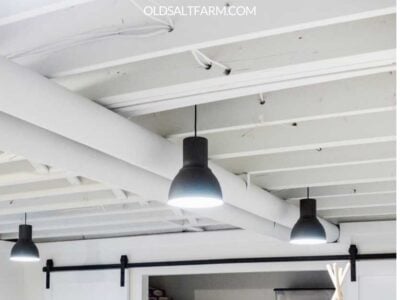 All the details on our painted basement ceiling, why we decided to leave it exposed, and all the reasons we love it!

Last October we started the process to finish our basement, and this week it will be complete! The process has taken a bit longer, so much of it we did on our own. Now that it is, we absolutely love it. There’s a play room, game room, exercise room, movie theater, and bathroom–plus a large storage room and workshop that remain unfinished.

One of the things we decided on was a painted and open basement ceiling, instead of finishing it with drywall, or adding a drop ceiling. We love love the way it turned out, and I thought I’d share all the reasons we decided on leaving it exposed. If you’re looking to do a basement remodel, or finish your basement, keep reading to see why you might want to remove your ceiling tiles and start painting!

Before: OUR UNFINISHED BASEMENT

WHY WE DECIDED ON A PAINTED EXPOSED BASEMENT CEILING

Each of these reasons was an important factor, and when putting them all together, it was a pretty easy choice.

We did framing and electrical ourselves, but we hired out the drywall. Our quote for the ceiling alone was thousands of dollars. Neither a finished drywall ceiling nor a drop ceiling were in our overall budget for the basement. This was a huge reason for deciding on an exposed ceiling, and not finishing it. The cost of painting it instead was much, much smaller. We hired someone to do all of the painting mostly because of the ceiling and the movie theater, and adding in the ceiling wasn’t that much more. There was also prep work, including cleaning and wiping down the basement rafters, pipes, and ducts to get rid of the dust and cobwebs in all the nooks and crannies. We handled all of that before the painters came. We didn’t have insulation in the ceiling, so it was a non-issue.

Honestly, this was just as important of a reasons as the budget, perhaps even a little more. The ceilings in our basement are 8 feet, but the metal vents, plumbing, ductwork, and beams hang down at least a foot. If we finished the ceiling, it would be way too low, and with a husband that’s 6 ft. 4 in., low ceilings aren’t the best. By choosing to paint it instead, and leave it exposed, we get the full 8 feet, plus it feels like it’s even more, because of the open beams to the first floor. When we walk downstairs it doesn’t feel like a super cramped space, and the

Granted, this did not play a major role in our decision to have a painted basement ceiling, because the first two reasons were so important. But if it was going to look terrible, it would have been hard. But I also had a vision for what I wanted it to look like, and I felt like the industrial style would be a really good fit. I love love the way it looks, and it definitely matches the whole vibe of the basement. The exposed beams are one of my favorite things now, and the paint completely transforms the unfinished basement ceiling. I chose lighting that would also add to the overall feel, and together they work so well together.

I decided on white paint for our painted basement ceiling because there’s only one window down there, and I wanted it to be as light and open as possible. Many people paint their basement ceiling black, which gives it a different vibe, but open, light, and bright were my goal, so I went with white. It’s not a true white, because it would show everything, so it’s tinted every so slightly gray, but still looks white when you look at it.

We did paint the movie theater ceiling with black paint, and the walls are a dark gray, which is what you need in that type of space, and I love it in there.  But white for the rest of the basement was my top pick!

I chose pendant light fixtures that would hang down, making sure the light was even distributed, rather than up higher in between the beams. They have an industrial look that I love, and really matches the look of the open basement ceiling. We put in quite a few (10) lights, and all of that also helps keep the whole space really light and bright, which was my goal. I didn’t want to walk down to the basement and feel like I was in a cave, even though it’s naturally a very dark space. They’re uniform throughout the space, and we measured closely to make sure of how many we needed so they’d line up nicely.

The lighting is by IKEA, but when they were out of stock when I needed to purchase them. I knew they eventually come in, but I didn’t have time to wait. Fortunately I found them on Amazon, and they had enough for the entire basement! They were really easy to install, and we didn’t need to hire an electrician.

If you’re hiring out the painting of your basement, you can choose to include this in the quote, or do it yourself. If you do it yourself, you will need a larger airless paint sprayer to get the job done more quickly and spray more easily. A paint roller will not be sufficient to cover all of the small pipes and wires evenly and thoroughly. Even investing in a paint sprayer will save you money hiring it out, and you will be able to use it again and again, for so many projects.

Another option is to rent one from your local hardware supply store, like Home Depot or Lowe’s.  If you only plan to use it once, then it might make more sense to rent for a day or the weekend.

After the basement project we built a barn, and used this same type of sprayer to paint it with three coats in just one day! You could also use this to paint your entire basement, if you planned to do it all yourself, and it would work really well for the both the ceiling and the walls.

While we didn’t paint our own ceilings, we’ve done a lot of painting, and do have quite a bit of experience.  We also watched the painters complete the project, and watched them to look for any other tips and tricks we could use in the future.

**Someone asked me for a picture of that the junction boxes look like for the lighting, and I thought I’d post it here, in case anyone else was curious and looking for that same information.

THE QUESTION I’M MOST ASKED

Hands down, the biggest question I get is about the noise that comes with not finishing the ceiling.  This answer may be different for everyone, but I can answer it from our experience.  We have six kids, and the basement gets a lot of use.  It’s mostly used as a playroom, but we also have a theater in one corner.  Above the play areas, we don’t hear much more noise than before. That said, my kids played down there before it was finished, so not much really changed on that front.  We have a piano in the basement, and I hear it faintly upstairs.

When the kids are watching a movie in the theater (we have speakers set up too), I can’t hear it anywhere in the upstairs except our bedroom, and especially our bathroom, because it’s directly above it. There’s also a vent in the bathroom that leads directly to that room.  It’s the only place in the house that’s affected.  It hasn’t been a big deal for us, because they’re not watching while we are going to sleep.  But I’ve also just put something over the vent on the few occasions when it’s been an issue, and it totally helped.

If you’re planning on a theater with loud speakers, you may want to consider something different for that space, depending on your home and situation.  But for us, it’s not been a big deal, and we’d still make the same choice again.

To save money, you don’t need to use the same kind of paint that belongs to the color you chose. That also helps the budget!  I was able to color match the paint in a less expensive brand of latex paint. It has held up beautifully, and it’s perfect for the basement. Simply White wouldn’t have been my first choice under regular circumstances, but fate intervened.

It’s s the original color I chose for all of the walls and trim on the upper floors when we first started building Old Salt Farm. But when the painter put a bit on the walls, I could see right away it wasn’t the look I was going for.  But we had already purchased all the paint, and had many 5-gallon buckets that we didn’t want to go to waste. Knowing we would some day finish the basement, we stored it in the basement, so it wouldn’t go to waste. So…Simply White it was! But I wouldn’t change a thing. The downstairs space needed a bit of creaminess, even if very slight, and I love it.  All of the white walls and ceiling, plus the great lighting totally brighten up the whole space.

I usually like a wider trim, and upstairs it’s 6 inches.  But we needed it on the top and bottom of the wall, since there was still a bit of unfinished area where a finished ceiling would have been.  With 8 foot ceilings, there just wasn’t the space for larger trim, so we used 3.5 inch on both top and bottom.  It turned out to be perfect for the space.

How has the ceiling has held up, and what does it look like now? Four years later (2022), it looks exactly the same! We’ve had no issues at all, and are so happy with our decision. We would absolutely make the same choice!