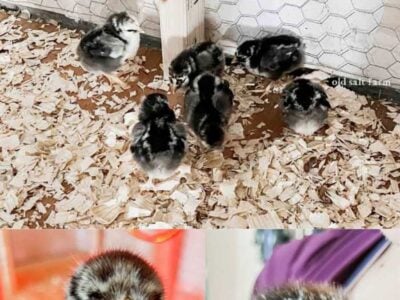 The story of how we came to have baby chicks, what brought me to tears the first few days, and some of our tips for first time chicken owners.

We have some exciting news…there are now six of the most adorable baby chicks at Old Salt Farm! Our family has never had pets or animals of any kind, so this has certainly been an adventure over the last couple of weeks. We are in love with our cute chicks, and looking forward to when they get bigger too.

So how did this happen? Well, it all started with an online order from Tractor Supply so I could make this DIY Outdoor Foot Wash. My kids were with me when I went to go pick up the supplies via curbside delivery. While there, my littlest had to use the restroom, and so of course had to go inside. Do you know what you pass on your way? The darling baby chicks! How does one resist them? Clearly, I don’t know the answer to that, because I came home with six chicks (all girls). It was so unlike me to do it with planning forever, or doing a bunch of research, but it felt right in the moment.

Each of my kids picked their own chick, as well as a name. I’m pleased to introduce…

When I tell you we went into it blindly, that’s exactly what happened. I’m usually such a planner, and don’t do much spontaneously, so this was a surprise. However, I had been thinking about getting chickens for quite a long time, it was just when I expected it!

The kind employees helped us with all of the basics: bedding, food, feeders for food and water, and a heat lamp. The chicks were in a box, all cuddles up and ready for the trip home. After our whirlwind trip, we were ready to head home. My husband quickly built a pen for them to have until they were ready to be in a coop. Fortunately we had chicken wire and wood already on hand, so it didn’t take too long. We have extra room in our garage, and decided to put them in there instead of the barn, so they’d be close.

My kids actually set up camp chairs all around the pen, just so they could sit and watch for as long as possible. They loved to hold them, and the baby chicks were mostly calm. At this point they were only a few days old, and we were all officially in love.

But after just two days, we noticed that Gertie wasn’t walking. She sat down most of the time, shaking, and trying to keep one foot in the air. It was absolutely heart wrenching to watch, and my kids were beside themselves. We literally had no idea what to do, but knew we had to do something. After searching online, we thought it could be bumblefoot, but with zero experience, wanted someone else to take a look at it.

I must have called at least 30 vets in our area, and not one of them was able to take us. I was a mess! Most didn’t see chicks, and the few that did weren’t accepting new patients. We live in a rural farming area, so it surprised me I wasn’t able to find a farm vet that was willing to take her. Finally, after literally crying over the phone, and begging, one office agreed to see her, but it wasn’t for a week. We were afraid she might not make it a week, so we took matters into our hands until then.

After separating her from the other chicks to protect her, we gave her twice daily foot soaks in warm water and epsom salt. She couldn’t stand or sit very well, so we rolled up a small towel to make a nest. Then she was able to perch in the middle of the nest and not have to have any pressure on her foot. We gave her food and water out of tiny plastic condiment cups, because she wasn’t able to get up on her own. It was definitely a labor or love, but all of us were happy to do it.

One week later, we finally were able to take her to the vet. The vet said we did all the right things, which was a huge relief. Her foot was nearly healed! We went home with a bit of pain medicine (and the tinies dropper I’ve ever seen) to help her feel comfortable walking.

We have now settled into a new daily routine. The pen needs to be cleaned out each day with new bedding. We also make sure they have fresh food and water. The kids have come up with a schedule, and they each take a turn. Chicks are pretty low maintenance, but it’s been good for my children to have the opportunity to take care of pets. We are still in school, so it’s been an afternoon job, but during the summer I think we’ll switch to mornings.

Baby Chicks: What to expect the first few weeks

Are you considering getting chickens? We’ve only had them for a few weeks, and definitely aren’t experts, but we’ve learned a few things we can pass along.

We love our chicks! Now on to hunt for chicken coops…