We have lived in this house for a little more than 6 months, and I FINALLY put something up on my girls’ wall!  When we found out we were expecting this baby, it put all of my decorating on hold, as we tried to decide where kids would go, and if rooms or bedrooms would be switched around.  I didn’t want to do anything to any room, until I knew it was staying put!  Just this past week we made final decisions, and I was able to start with some darling shutters that I refinished, and turned into a clipboard for my girls’ bedroom wall.  It turned out to be the perfect thing for that wall, and they are so excited to be able to clip up their favorite pictures and artwork. 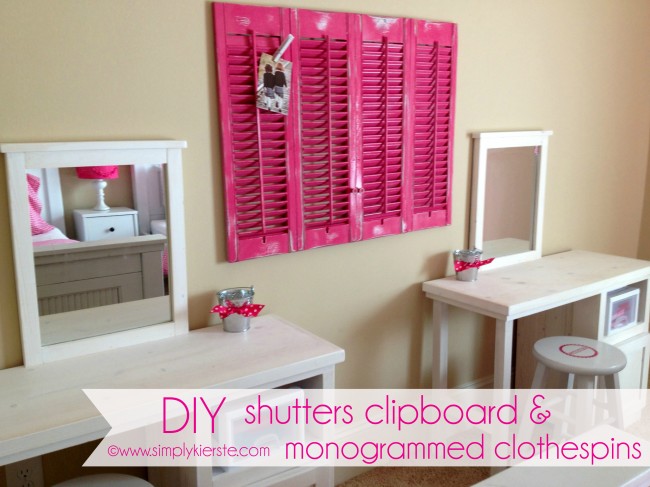 I ADORE old shutters, and I look for them everywhere. Some good places to look are at your local Habitat Re-store, and on the side of the road.  :)  I like to drive around older neighborhoods–ones that would most likely be replacing old windows, shutters, and doors–to see what I can find.  If you can research when heavy trash day is in that neighborhood, go a few days before that, and your chances will be greatly improved.  I for one, have no shame taking things off the side of the road that people are throwing away! Some of my best finds EVER have come from the road!

In addition to refinishing the shutters, I made a set of monogrammed clothespins, that will be perfect for each girl to pin their favorite artwork and pictures to their new clipboard!  This was an easy project, but really changed the look of the room, and added a much needed pop of color on to a very big and beige wall.  :) 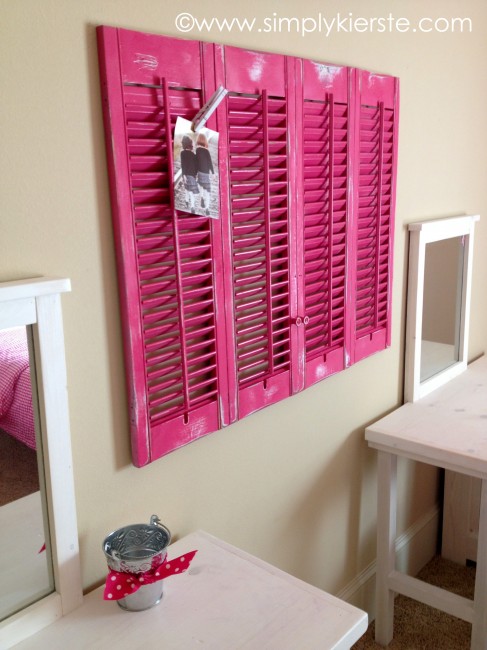 The color that I eventually wanted the shutters to be was pink, but I wanted them to be distressed, with white coming through underneath.  So, I painted the shutters white, and let them completely dry.  Next step was to paint them pink!  }I used Rustoleum’s Semi-Gloss White, and Satin Berry Pink}

Once the pink was dry, I took my trusty power sander, and medium grit sandpaper (100), and went to town!  I went down the middle of the shutters, along the top, bottom, and edges until I was satisfied with the distressing.  I wiped down the entire thing with a damp rag, to remove all excess paint dust. My shutters were ready! 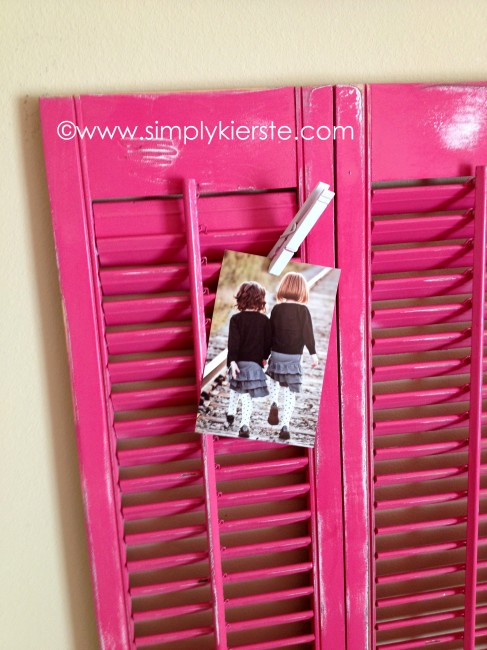 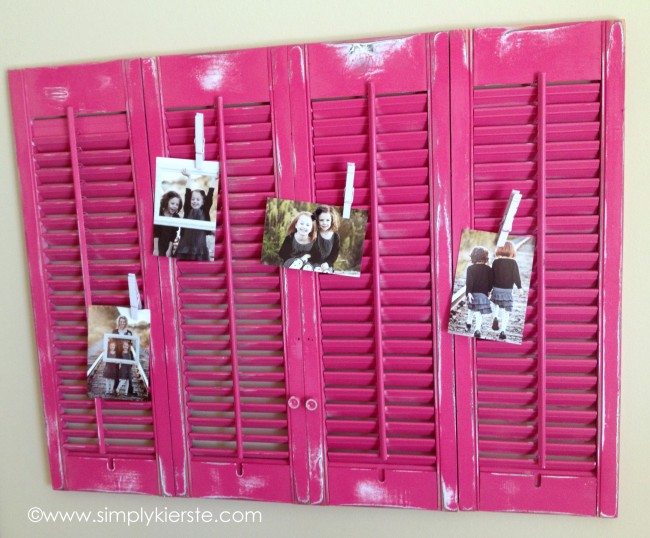 Once again, a super easy project!  I used regular, cheapie clothespins I got in a huge pack for around $1 at Walmart, and painted them the same pink as the shutters.  Once the paint was dry, I added a coat of white.  I wanted some pink to show, so I wasn’t super careful about getting every nook and cranny. I thought it would be fun for them to not be a solid white.

Once the white paint was dry, I cut out my girls’ names in matching pink vinyl on my Silhouette {font=my own topher} to fit the end of the clothespins, and applied them.  It’s perfect for them to be able to put their mark on their own artwork and pictures. 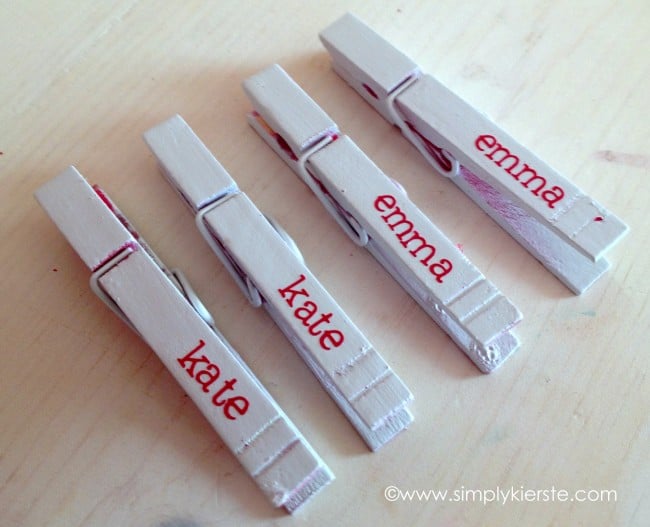 I placed a small pail on each of their desks, and filled them with the clothespins, so it would be easy for them to find them and keep track of them. 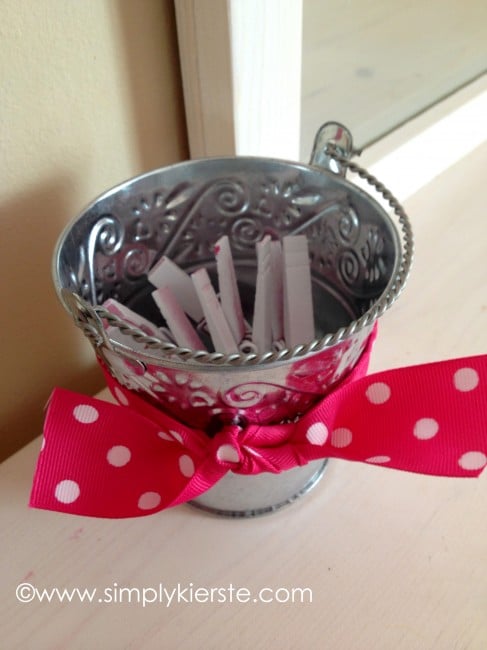 This is the other side of the room… 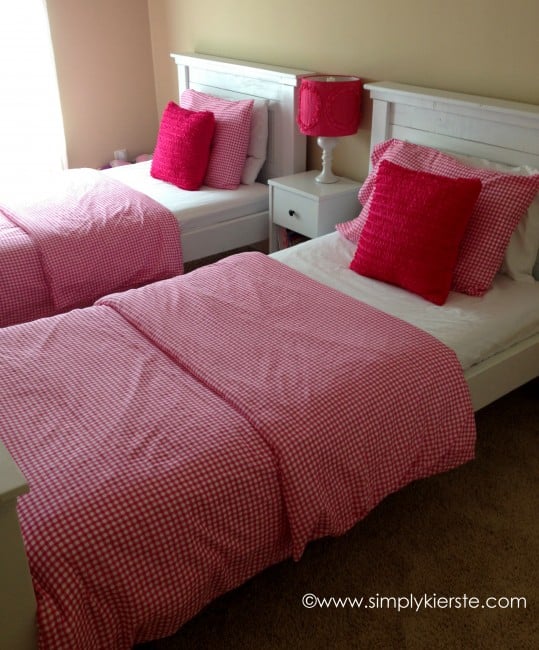 Next project for this room…adding something above their beds, and pictures on the wall!