Early last Wednesday morning I left for the airport with my three girls after spending a glorious week with my parents.  I had no idea that it would be a long two and a half days before we would finally get home. We happened to arrive at the Chicago airport just as a major storm was making its entrance, and due to a deadly tornado that was crossing the state, many flights needed to be delayed and cancelled. With no luggage, no way to get home, and three little girls counting on me, it was an experience I won’t soon forget.

I’ve flown many times before, but I’d never even come close to being stranded. Somehow everything had always been very uneventful, so I had no idea what was in store for me, and ultimately, what I would learn from it. 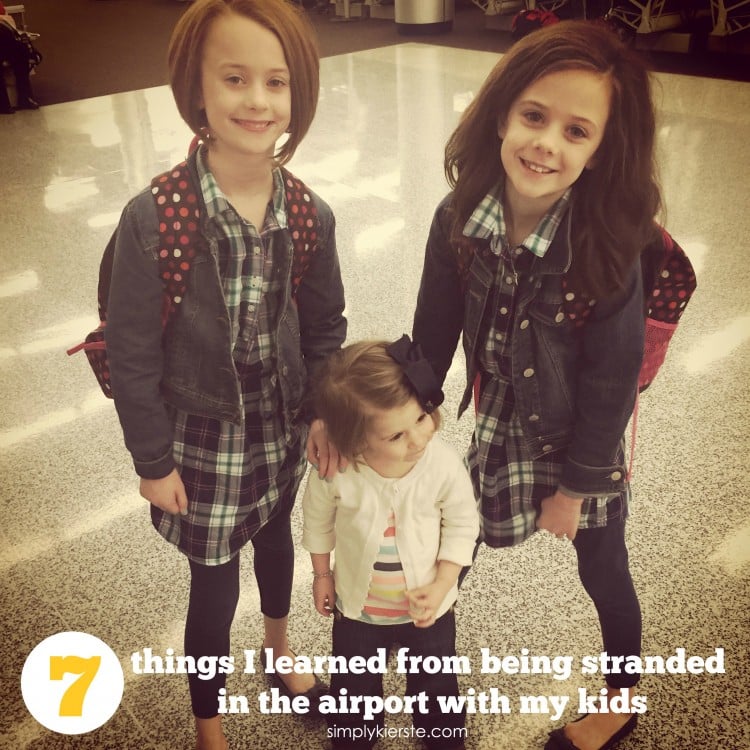 Our luggage ended up making it home the first day we left, and so we spent those two and half days in the airport without any clothes or personal items–just what we had on us.  I was so grateful that I had packed extra diapers and supplies for the baby, so it wasn’t until the last day that I started to really worry about running out. I ended up finding a very small pack of diapers (and spending a small fortune for them) after a lot of searching through the airport for them, but not before I had to try and think through several different plans and options in case I couldn’t find them. I learned that no matter how easy you think the flight is going to be, how nice the weather is, or how quickly you think you’re going to get home, you just never know when something will happen, and I would much rather err on the side of being over prepared than under prepared.  Think of those things that are the most important to you–medicines, diapers, extra clothes for babies and small children–and make sure you have them, just in case!

Also, set aside a little extra emergency money to cover items like hotel stays, food, supplies, etc.  These things may not have been factored into your travel budget, but as I learned, you just may end up needing to spend more money than you bargained on. After two unplanned hotel stays, and almost three days of airport food for five people (which isn’t cheap!!), paying $16 for 10 diapers,

2.  Airlines don’t want to cancel flights, but they do it to keep us safe

One of our flights was delayed for more than six hours before they finally announced that it was being cancelled.  I heard a lot of complaining and grumbling, which I totally understood.  I was the only one with little kids on that flight that I could see, and I knew how hard it was going to be to spend another day there. It’s so frustrating to be stuck, and to not be able to get where you need to go.  At the time we didn’t understand the seriousness of the storm, or really what was going on, but I was okay with that.  I would much rather be stuck, no matter how hard it is, than risk my kids’ safety or my own.  It’s not easy for the airlines when there are so many cancellations–far from it.  The incredibly long customer service lines, trying to find space for all of the displaced passengers–it certainly isn’t something they would choose to do unless they felt it was necessary. It’s not fun on their end either. So thank you–thank you for keeping us safe.

3. You can catch more flies with honey than vinegar

The old adage is true, I think.  Everyone wants to be treated kindly, with respect, and most people will react much more favorably to you when you do as such. As I was trying to navigate flights changes and re-bookings, I had to rely on the airline staff to help me. No matter how much I wanted to pull my hair out, I tried to remember that it wasn’t their fault I was there, that they were doing everything they could to help me, and that were hundreds of other people going through the same thing.  Treating others as you would want to be treated? The golden rule is always in style, and it will always get you farther than rudeness.

4.  There are a lot of good and kind people in this world

I’ve always known this to be true, but it was reaffirmed to me during this experience.  I had so many people reach out to help, from small things to big things. To the people that switched seats with me so I could sit by all of my girls, the gentlemen that opened doors for us, the United airlines gate agents that went searching for a hotel voucher for me, the waitress that ignored my ragged look but saw my tired face and went the extra mile, the people that smiled at my girls instead of being angry when they were a little loud trying to entertain themselves after sitting for hours on end, the people that saw the puzzled look on my face and offered directions before I could even ask, and all the others that helped us along the way–I thank you, and I’m grateful. Please know it made all the difference.

5. Try to find a different answer to the problem

I took one look at the airlines customer service line that stretched as far as I could see down the concourse. Every person that had just had a flight cancelled had to find a way home, and it was easily a three to four hour line. I knew that there was no way my overly tired baby and antsy eight year old girls were going to be able to handle standing for that long with a million other people.  Yet I still had to find another flight to get us home, and I knew that the longer I waited, the harder it was going to be–the faster the flights would fill up.  With four of us traveling together, it was always going to be more difficult to get on a flight than if I was alone.I also considered renting a car and driving home, so we were only eight hours away, but since the storm was headed that direction, it wasn’t safe for us to be on the road.

I decided to call them instead, and fortunately my kind husband even took that from me, so I could calm my crying baby, and get all of my hungry girls some lunch.  He was able to get through in about 15 minutes, which saved SO much time.  They told him that I needed to still talk to customer service in order to confirm our seats, so I decided to go to a gate agent instead–one who didn’t have full seats or a lot of people waiting at the gate.  What could have taken hours took only about 30 minutes, and I left with my boarding passes, help with a hotel, and some sanity.

6.  Appreciate the things you are probably taking for granted

I don’t mind roughing it, I don’t care if I’m always wearing makeup, and I certainly am no stranger to a ponytail or bun. But even when we go camping, I get to use deodorant.  And change my clothes.  And use a hairbrush.  We’re lucky–we don’t have to think about those things on a daily basis, and the the proverbial “you don’t know what you have until it’s gone” is absolutely true. I was able to have a good conversation with my girls about all the people in this world that don’t have the luxury of taking these things for granted, and talked about some of the ways that we an make a difference.  Yes, it was not fun to be without any personal items for nearly three days, but how grateful we are to have them.

In addition to the basics of having food to eat and somewhere to stay, one of the things I was worried most about was keeping my kids entertained and happy during all of those hours waiting and sitting, then waiting and sitting some more.  Kids are very resilient, but they do take their cues from us. If we focus on the negative, or act really flustered and upset, they’ll feel it.  The situation is what it is-it can’t be changed, so looking at the positives, and making it an adventure can help them to cope–and you too!  So, we ate caramel popcorn and more junk food than we normally would, watched a bunch of movies, played at the children’s play area, took walks to check out all the restaurants, snuggled up in our hotel beds and talked, and tried to turn a difficult situation into an unforgettable one.

Yes, I wish we hadn’t been stranded, but I’m not sorry for the experience we had.  I’m so proud of my girls, and how they reacted to the situation. My twin girls (age 8) were a huge help to me and their baby sister, and I’m grateful for their positive attitudes. And we even had fun!

I have a feeling we’ll be talking about it for many years to come!

The images, tutorials, and content on oldsaltfarm.com are protected by copyright laws. DO NOT distribute or copy the content without written permission. You may not use any images without permission. DO NOT edit or remove watermarks from any image. Pictures are not to be changed or altered in any way, shape or form without my consent. Please do not copy text or reprint recipes without my permission. All ideas and printables are for your personal use only. By downloading any files or printables, you accept that they are FOR PERSONAL USE ONLY. My patterns, ideas and tutorials are NOT intended for resale or re-distribution.

Interested in sharing one of my photos or projects? Fill out my Old Salt Farm Feature Agreement.

CREATE AT YOUR OWN RISK

Any and all content on this website is created for inspiration purposes only. Creating with my suggested methods, products, instructions, tutorials, and tools is at your own risk. Please ensure you are following proper guidelines with anything used, and seek professional advice if you don’t know how to do something.

Old Salt Farm is for entertainment purposes only. All tutorials and demonstrations are not intended to be professional advice, nor substitute as such, and I make no guarantees as to the procedures and information here.

Kierste Wade (Old Salt Farm) is a participant in the Amazon Services LLC Associates Program, an affiliate advertising program designed to provide a means for sites to earn advertising fees by advertising and linking to amazon.com. Amazon offers a small commission on products sold through their affiliate links. When you make a purchase after clicking on one of those links, I earn a small commission that helps support this blog, at no extra cost to you.