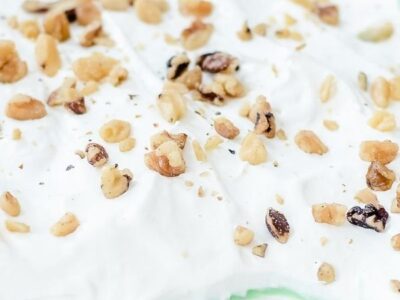 This recipe has been a favorite in our house for many years. I first discovered it when we were in college, when a friend of mine brought it to a party. I immediately had to ask for the recipe, and it’s been a staple ever since.

I love that it’s so versatile, and I can use different flavor puddings. My absolute favorite is pistachio, and pretty much think it’s perfection. I especially love it during the spring and summer. Lemon is a very close second, maybe even tied for first. I can’t decide. Chocolate is also fabulous, and always a crowd pleaser. I tend to make chocolate more during the fall and winter months, but of course, every season is chocolate season! Butterscotch is another really yummy option.

And best of all, it’s easy to make, but looks fancy! There are layers, so it takes a little time to make all of them, but it’s not hard, and goes quickly. And it’s totally worth it! The shortbread crust is nutty, rich, and buttery, and when it’s paired with the delightful cream cheese and pudding layers, it’s pure heaven.  The whipped cream  is the perfect topping…it’s so, SO yummy!  I really could eat the whole pan.

This recipe has been around for a long time, and the one I originally had called for Cool Whip to go on the top. I”m just not a huge fan of Cool Whip by itself—unless it’s being added to something as a filling. I like the real deal! So I started making my own whipped cream for the top, and it it makes such a difference.

I like to make this when I have guests, or when I need to take a dessert to a party or gathering. And of course, my family just can’t get enough. Neither can I. 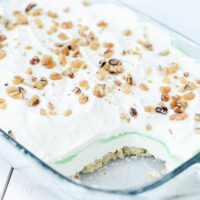