Are you a Downton Abbey fan?  If you love that series, or historical drama in general, I’ve got a list of nine more shows you have to see! 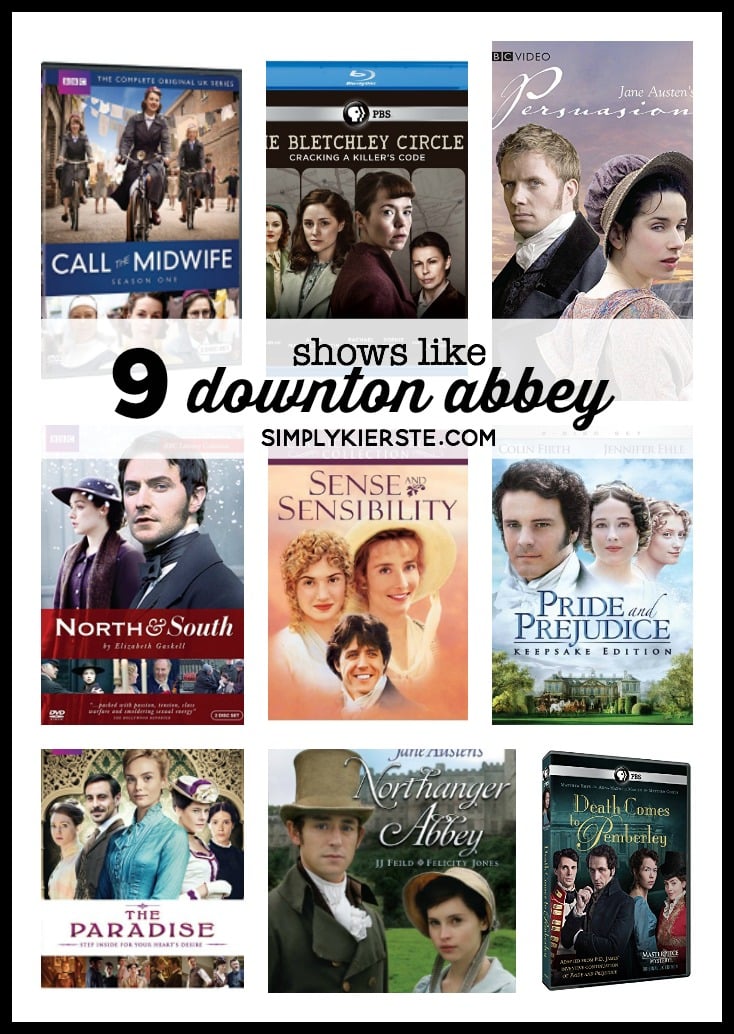 They may not have everything in common with Downton Abbey, but they’re all period dramas that will draw you in just the same way.  All nine are on my list of  favorite shows, and I can’t wait for you to see them!

If you have someone on your gift list that loves Downton Abbey, one of these would be a great gift idea! These are perfect for watching over the holidays, and I’m already looking forward to it.

(affiliate links included below for your convenience!)

Hands down, Pride & Prejudice is my favorite! I have watched it so many times, and I know I will watch it thousands of times more. This is my favorite version, and I love the casting of Mr. Darcy and Elizabeth…and the whole cast! If you’ve seen the version with Keira Knightley, it’s okay–but this one is a must see.

North & South is one of my absolute favorites, and I could watch it again and again. And I do! It’s the story of the daughter of a parson and a cotton mill owner in northern England, and her struggles with a new town and way of life. This is in my top three–I LOVE it!

This is my favorite version of Persuasion…I’ve watched it a hundred times, at least! Young Anne Elliot breaks off her engagement with a handsome naval officer after being persuaded to do so, and eight years later he appears in her life again. SO good!

This is my favorite version of Sense & Sensibility , a romantic comedy that tells the story of the Dashwood sisters. whose chances at marriage are at risk when their family loses their fortune.

I stumbled on Bletchley Circle last year, and I’m SO glad I did. It has become one of my very favorites! Four women that had worked as codebreakers are now civilians, and one of them has collected information about a series of murders in the area. She calls together her former colleagues, and together they track down the killer. It’s so well done–I was so sad to see it come to an end!

The Paradise is Britain’s first department store, and this tells the story of Denise Lovett–her ambition to move up the ranks and her love story with the store owner. It’s such a fun series–I loved it!

Love, love love Call the Midwife!! It chronicles the true-to-life experiences of midwives in and families in East London in the 1950’s. It’s moving, funny, sad, thought-provoking, and so much more.

Northanger Abbey is one of Jane Austen’s best…and a love story full of romance, drama, and humor.

Death Comes to Pemberley is the next chapter in the Darcy story, and occurs six years after Pride & Prejudice leaves off. It’s a Pemberley mystery!

Now you just need a mug of hot chocolate and a cozy blanket, and you’ll be set!

Subscribe to Simply Kierste for TONS of ideas for home, DIY, organization, recipes, holidays, and more!  Just enter your email in the box below! xoxo