What a month!  After waiting for so long to get started, it’s amazing how quickly the last four weeks have gone.  So much progress has been made, and that makes me so happy!  I’m looking forward to giving you a tour of sorts…filling you in on the first month of building Old Salt Farm! The first month may not seem that exciting, but really, a lot happens, and very quickly. We went from a blank piece of property to an actual framed house in just four weeks!

Our property is about 45 minutes away from where we live now, so we take the kids out every weekend to see the progress. (My husband and I go often to check on things.)  We build a campfire, roast hot dogs and marshmallows, and dream lots of dreams about what we want to build in the yard.  We love it!  Old Salt Farm is underway! 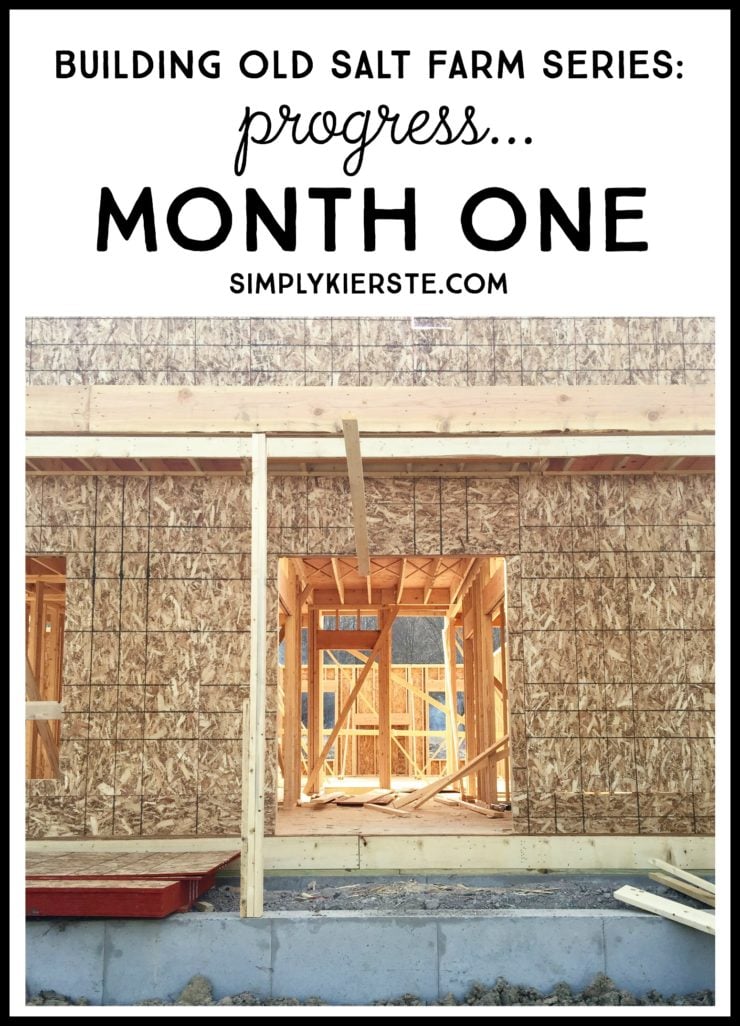 Let me just take a quick second to tell you what happens before building started.  I’ve had people ask me about that part of the process, and while the time it takes will differ between builders, states, counties, and even cities/towns, the basics probably won’t. First, plans are completed by an architect, and then stamped by an engineer.  Where we live, certain soil tests needed to be performed, as well as property and drainage surveys.

Next…applying for a building permit! When the builder applies for a building permit, there is a list of things that the town requires before it will issue it.  However, it’s important to check with the city first before purchasing your lot/land, just in case there’s a known problem or issue that could cause problems or delay building. Our realtor reached out to the town our property is in, and found out that there was/is a building moratorium on lots of certain acreage.  Ours fit that criteria (we have 9 acres), and at first we were worried that we wouldn’t be able to purchase it.  Thankfully, because we have a certain amount of frontage, they waived it for us.  However, if we had gone ahead and bought it without checking, and the frontage hadn’t existed, we would have been unable to build–but owned the property.

Once the building permit had been issued, we were ready to go!

We didn’t take many down, just the ones where our driveway was going. Our property is quite wooded, but there is a large meadow where the house will be, and we didn’t want to take out any trees that we weren’t necessary.

-Footers in (for pouring the cement)

I think this has been the most exciting of all!  It was amazing how seemingly overnight we went from not having a house, to having the outer framework up. It’s so fun to walk through and finally see what the house looks like–the one that you spent hours poring over on paper.  This is the end of week four, and the framing isn’t completely done, but it’s getting close!

Framing is also the time to catch anything you want to change, because it’s fairly easy to do at this point of the game.  Any farther down the road, and it will be expensive and take time.  We have walked through several times, and already we’ve added another window, double checked on the height of the fireplace, and added extra lumber above the doorways where the sliding barn doors will go.  We also made sure to add extra framing on the front porch for a porch swing, and in the kids’ bedroom lofts for the railing and ladders.

WHAT I’VE BEEN DOING:

This first month has actually been incredibly busy. There are a lot of choices that have to be made the first month, and quite early on.  Windows and doors are the first things to be decided upon, because they are the first to go in.  Plumbing is also at the top of the list, because it goes in right after the framing.  Cabinets and countertops are next, and flooring also has to be considered, because you want them all to go together. Appliances have to be chosen before you can finish the cabinets, so the measurements are accurate. There are so many choices to make, and literally almost at the same time, because they are all so intertwined.  I’ve literally had appointments with vendors every single day for the past three weeks, and I’m not finished!  I did have a very good idea of exactly what I wanted, so it hasn’t been super hard to make most choices, but is hard is the BUDGET!!!

Sticking to a budget can be very difficult when building a home.  When you sign a contract with a builder, you sign it for a specific amount of money. Within that contract are built-in allowances, for things like flooring, cabinets, countertops, plumbing, etc. Every builder works it differently, and has a different “standard allowance”.  You can also add in additional amounts into the contract before you sign it, if you already know you’re going to go over the builder’s allowance.  We wanted to be as close to our final amount as possible, so we ended up doing that, and including it in the contract. Even so…it’s tough!  I always seem to be drawn to the most expensive thing!

We are constantly shifting priorities…and money. We went over in plumbing (which we knew would happen), because of the farmhouse sink and faucet.  That meant that I needed to come down in another area to make up for it.  This has happened a lot!  Newel posts, exterior front porch posts, clearing a large wood pile, moving the hearth up 6 inches, adding a window in the family room, changing the front door handle, making a door all glass instead of solid, changing the door style, getting a matching fire door (to go with the interior doors)…all additional charges that I didn’t foresee, and it’s hard to.

I’ve had to make a lot of concessions–to remove things or not have things that I would love to have.  I could build an amazing house with an unlimited budget!  But it’s life. There’s always a budget, there’s always a limit, and learning to choose things you love within your budget is important to your pocketbook and to your happiness.  I have been able to do that, and for that I’m grateful!

I have to say though, that I love it.  It is crazy, and kind of emotional at times (mostly because I know that it will be my fault if I don’t like it! :) ), but I’m enjoying the process of designing our home.  Hopefully it will all turn out the way I imagine!

I have also started the design process for the kitchen island, mud lockers, sliding barn doors (ten of them!), shiplap above the fireplace and range, and family room built-ins. Those are the things we’re building ourselves, which means not only are we saving a ton of money, but I get them exactly the way I want them. I found an old barn from the 1800’s that was being torn down, and bought enough reclaimed wood to build our kitchen island with. SO excited about that.  My husband and I both love being hands on, and being able to contribute to our home.  There are many other things that we want to do, but they’ll have to wait until after we move in, since there just isn’t enough time for all of them–things like shiplap on several walls, frames for mirrors, and closet shelving.  That’s the thing about building–just because it’s new doesn’t mean you’re not going to have projects!

Wahoo! One month down…three more to go! (I hope.)